How to Make Your Yoga Retreat a Huge Success, no Matter What

I’m going to share with you a story, of how I navigate the world of leading international retreats. You’re likely reading this article because you also lead retreats, and you want them to be a huge success. Here’s my inside secret on guaranteed success, no matter what.

It’s my third year leading a retreat at Haramara Retreat Centre in Sayulita, Mexico. That’s 18 hours of flying from my home in Auckland, New Zealand. Half a world away.

The first year, I was co-facilitating with someone who had a decent following in the US, including a number of clients. We got numbers, with ease.

The second year, it was me all by myself and three months out, with only a couple of people signed up, I totally freaked out. I was afraid I couldn’t do it by myself, that I didn’t have enough pull, that I wasn’t enough… and look! The numbers proved it!

I emailed Haramara and told them I couldn’t do it and asked what would happen if I cancelled now. I thought I’d lose my US$1000 deposit… and I was prepared to take that hit to just make the stress and worry go away.

Turned out, according to my contract, I stood to lose more like US$3000. And I wasn’t prepared to lose that. So I doubled-down, showed up, fully committed… and people started signing up within days. I ended up with 14 amazing students and an epic Retreat.

Phew! Lesson learned… if I’m not fully committed, why would other people commit? If I’m afraid, what shows up will ‘prove’ that fear.

This year, I thought it would be super easy. I’ve got a growing database of people in the US and Canada who have come on retreat with me. I was being interviewed on American podcasts like Tantra Punk and The Mike Mantell Show about my memoir. And I was fully committed and passionate about the body of work I wanted to share.

It seemed that people were signing up, and I was on track. But then people who had expressed strong interest decided not to come. Someone who had signed up had to drop out. People who had inquired didn’t follow through. And now it was only five weeks away.

Through all of this, I’ve been observing my thoughts around the experience, while showing up and attending to what’s required. That stress, worry and anxiety from last year was absent. Yeah! This was good.

So I ran Facebook ads. Made videos. Wrote articles. Messaged contacts in the US and asked them to support.

Yesterday I went back and reviewed my contract, as it was time to do due diligence and get clear on what might happen. What happens if I only have six people on retreat (the number currently signed up, including myself and my assistant)?

It costs me more per person, that’s what.

I ran the numbers.

Ok. I felt into that. It’s not my desired reality. I reviewed my actions – on the material realm, I’m doing everything I can to promote the event. Possibly I could do more posts on Instagram and Facebook. Add that to my list. I emailed the Retreat Centre and shared where I was at, and asked for their support too.

But there was one more thing I knew I needed to do – the biggest thing of all, the thing that makes the MOST difference.

I needed to go in and Vision the Retreat and see whatever there was to see – Future Casting, as I see it. Which, as it turns out, is a key part of the work I’ll be teaching on the Retreat. And here I was – afraid to do it!

I mean… maybe this Retreat is only meant to have small numbers? Maybe something else is at play that I don’t know about?

I might have graduated from last year’s stress, anxiety and worry in the Great Video Game of Running International Retreats, but now something else was going on.

This was a different kind of test. It was the next level up. Of course!

So last night, I set up my altar, lit some candles, set an intention, and dropped into Visioning space.

I did NOT want to go forward in time to September 29th and feel what it was like to be on Retreat.

I noted that. I also noted that my initial inquiry was ‘How do I effortlessly attract five more people to Retreat?’ I noticed that there was a subtle underlying assumption, or attachment to outcome. That it was BEST to have more people.

Yeah, that might be best on a financial level. However on the level of transmission of teachings, working with a small group can be better.

I noticed that subtle attachment and dropped it. I was willing to show up to this Retreat regardless of numbers and surrender to whatever wanted to come through.

There was still fear at going into the future and feeling what it was like to be on Retreat. I asked, ‘what’s going to happen?’

And yet, I could feel how my desire to become the kind of teacher I had craved – someone firmly anchored on the path of self-realization who can see truth and gentle steer students with love – was taking me to a place where the identity of ‘teacher’ itself must fall away.

Where the ability to surrender to the Mystery and lead from that place was required. Where it was simply unknown what would happen.

And that felt fucking scary. Which was why I didn’t want to Future-Cast.

Immediately, I was reminded that I’m not alone. I’m supported by the teachings, by the lineage, and by the other people who will be sitting in circle with me.

Then I began to see the Circle, in the Shala at Haramara.

I saw myself, sitting at 12 o’clock, opposite Tanis, at 6 o’clock. Tanis has supported me on the last two retreats, and has worked with me as a student since buying my book Forty Days of Yoga in 2014. As I felt her energy of student, I also felt the way in which she supports, guides and holds me and in that moment those roles – teacher/student – melted into each other and a question arose within me.

I allowed that to permeate my cells.

Something deep opened, there was a dropping, a surrender.

And then I saw two other people in the Circle – Isobel, who has come to eight or nine of my Retreats in New Zealand and Mexico, who is committed to the work and holds me dear. I felt her, sitting at 3 o’clock, opposite Karen.

Karen who came last year to Haramara for the first time. She was new to the work with me, but she carried a wisdom and knowing with her that I felt. And when I said goodbye to her on the last day in the dining room, we hugged and then stood back, holding each other’s elbows, and I saw a vision of her and I working together.

Seeing those other three women in Circle, holding the directions with me, a flame of liberation in the centre, the other people joining us around the Circle… it became real and I knew that I could do it.

Those women were there, supporting me, supporting the teachings. This was a collective unfolding that I was just there to anchor and guide.

And I felt myself show up, fully. Despite the fear of the Unknown and of the Mystery. It’s all ok. More people will come. Or maybe they won’t. It doesn’t matter. What matters, as always, is the energy I move from, and the way I show up.

This is how I do “business”. This is how I lead international retreats. The inner work comes first, and that informs the outer work. The challenges in my business reveal the attachments and fears that are ready to burn in the fire of liberation.

All else, serves that.

The number of people who come to the Retreat is irrelevant. Losing money is irrelevant even. Whole-heartedly being present and releasing attachments and fears – that’s what’s relevant.

And that’s how you can guarantee that your Retreat will be a huge success – by using it as a way to reveal your attachments and fears, and doing the work around them. Then, no matter what happens on the Retreat, success has already unfolded.

That’s where the peace resides. The joy. The bliss. The contentment. The knowing.

If you’d like to join us in Mexico for the Awakened Heart Warrior Activation Sept 29 – October 4… click this link for more details and get in touch. It’s going to be an … unknown experience of awesomeness! 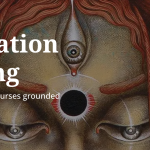